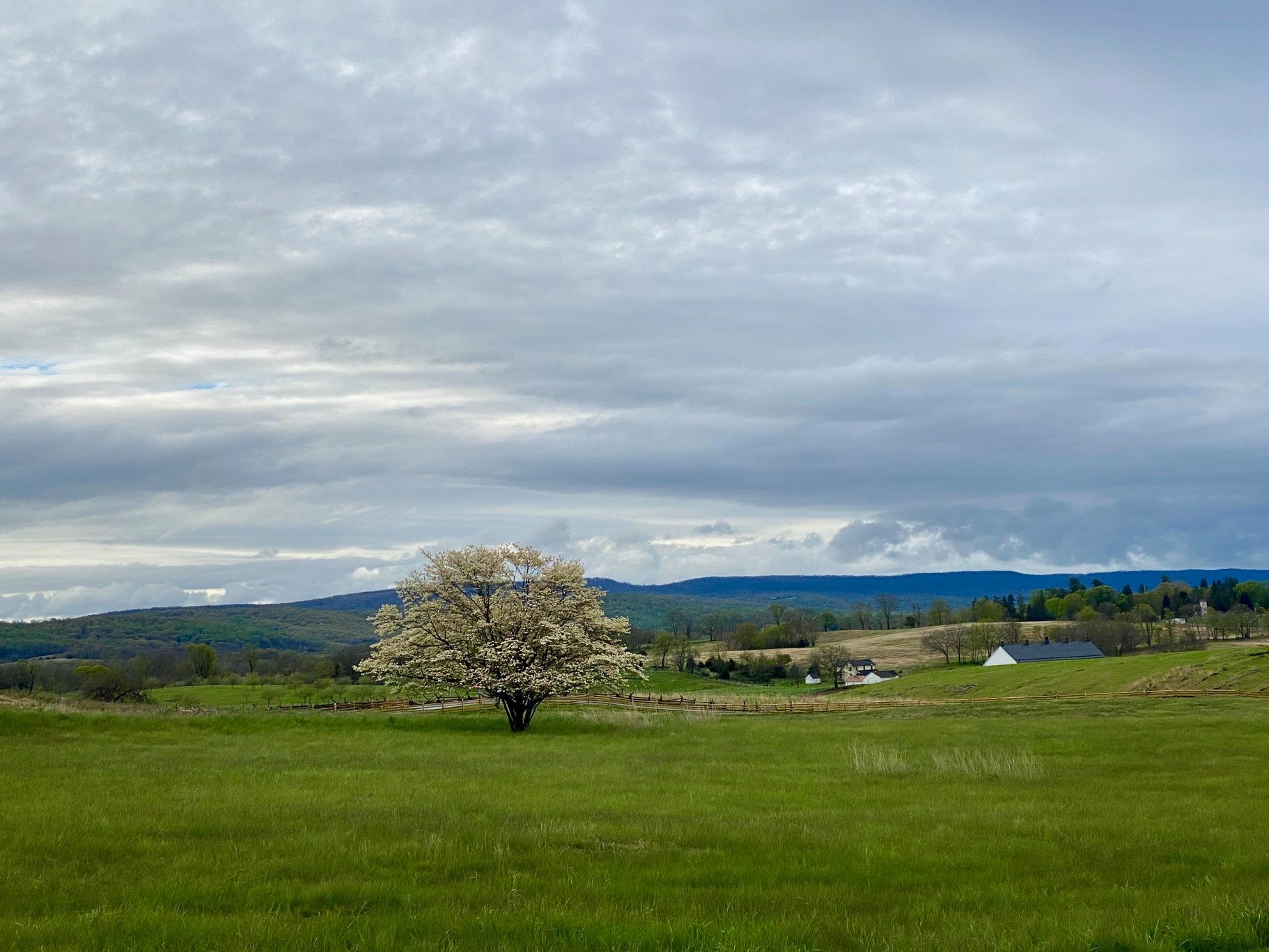 Marking the 160th anniversary of the 1862 Maryland Campaign, the symposium focused on the evolving scholarship, interpretation and understanding of the campaign over the last 160 years.

We were excited to welcome these five dynamic speakers: Steven Stotelmyer, Dr. Emilie Amt, Keith Snyder, Scott Hartwig, and Dr. Tom Clemens. Steve discussed the changing historiography of George McClellan; Emilie covered the evolving interfaces of slavery, emancipation, and the battle; Keith explained the evolution of the battlefield itself; Scott reflected on his perspectives on Antietam after a decades-long deep dive into the campaign; Tom wrapped-up the speakers’ portion of the symposium by looking back on the contributions of Ezra Carman and John Gould. Our symposium concluded with a panel comprised of our speakers enabling further free-wheeling conversations on these issues and discussions with our audience.

There were ample opportunities for interactions with the speakers, scholars/experts, and other participants during the presentations, lunch, and during the panel discussion. A continental breakfast and lunch were provided.

The Spring Symposium was held at Shepherd’s Spring Retreat Center on Saturday, April 23, 2022. This all-day event included presentations and a panel discussion. Here’s that day’s schedule:

9:00a – “Challenging the Established Historical Consensus of George B. McClellan.” Steve Stotelmyer

As historian Joseph L. Harsh observed, “It is impossible to write of the opening years of the American Civil War without confronting the enigma of George Brinton McClellan.” In 1864 one writer defined the enigma, “By some persons he [McClellan] is considered the greatest strategist of the age. By others he is regarded as unfit to command even a hundred men.” Little Mac has been cast as slow, timid, unwilling to fight, an obstacle to early termination of the war, and the first in a sorry list of generals to try the patience of President Lincoln. In 1945 Lincoln biographer James G. Randall noted, “For certain writers the military career of George B. McClellan has become a fixed stereotype. It is assumed that if one is pro-Lincoln, he must be anti-McClellan.” This talk will challenge the stereotype with historical fact.

This talk will survey changing perspectives on slavery and Emancipation in scholarship over the last two decades, and in longer perspective, especially as they relate to the battle of Antietam. Historians of American slavery now focus more on the actions and choices of enslaved people in bringing an end to the institution, and they emphasize the centrality of slavery in secession and the Confederacy. As a historian, Dr. Amt is interested in what this meant on a human level, so this talk will examine some local case studies that illustrate these broader scholarly trends. She will also look at influences on the adoption of the 1864 state constitution that finally freed Maryland’s slaves, and Dr. Amt will consider how the battle of Antietam, so closely linked to the Emancipation Proclamation, fits into today’s understanding of slavery and Emancipation.

The historic landscape of what is now Antietam National Battlefield has changed significantly over the last 160 years. This program will examine the land preserved, the monuments dedicated, and the commemorations presented from the War Department era to the current National Park Service administration.

1:00p – “Into The Weeds: My Journey Into Antietam” D. Scott Hartwig

Scott Hartwig will discuss some of what he has learned about Antietam and its aftermath from his years of study of the campaign for his forthcoming book, I Dread the Thought of the Place: The Battle of Antietam and Its Aftermath, to be published by Johns Hopkins University Press.  Much of what we know about battles and campaigns of the war often is derived from relatively superficial, and frequently biased narratives, often shaped by participants nostalgic postwar accounts.  Only by getting into the weeds of the story, and setting aside our preconceived prejudices and opinions, do we begin to understand what really happened.

Hardly had the Civil War ended when these two men began writing to veterans of the war, trying to get specific information about the great battle of Sept. 17, 1862. Together they amassed a treasure trove of information, almost all taken directly from participants, from ordinary enlisted soldiers to senior officers and generals. Gould produced a pamphlet about the death of Gen. Mansfield, a history of his regiment, the 10th Maine Infantry, and several other articles. Gould shared his material with Ezra Carman, the official historian of the Antietam Battlefield Board, and Carman wrote to many other veterans. Using these letters, marked maps, interviews, reports from the Official Records, newspaper articles and regimental histories, Carman produced his manuscript, the Maryland Campaign of September 1862.This presentation will focus on the methods, correspondence, and challenges faced by these two men,

Dr. Emilie Amt is an emeritus professor of history at Hood College in Frederick and an award-winning writer on African American history. She has published many books and articles on English medieval government, warfare, and religion, but has spent the past decade researching and publishing on slavery in western Maryland. Her forthcoming book, Black Antietam: African America Experiences of the Civil War in Sharpsburg, is scheduled for release by The History Press in summer 2022. She has a BA from Swarthmore College and a doctorate from Oxford University.

Tom Clemens earned a doctorate at George Mason University where he studied under Maryland Campaign historian, Dr. Joseph L. Harsh. He has published a wide variety of magazine articles and book reviews, has appeared in several documentary program. A retired professor from   Hagerstown Community College, he also helped found and is the current president of Save Historic Antietam Foundation, Inc. Tom is the editor of the three volume The Maryland Campaign of September 1862, by Ezra Carman.

D. Scott Hartwig retired in 2014 as the supervisory park historian at Gettysburg National Military Park after a 34-year career in the National Park Service, nearly all of it spent at Gettysburg.  He won the regional Freeman Tilden Award for excellence in interpretation in 1993, and was a key player for the design of all aspects of the new Gettysburg museum/visitor center.  He is the author of To Antietam Creek: The Maryland Campaign from September 3 to September 16, published in September 2012 by Johns Hopkins University Press, and is currently working on the second volume, tentatively titled, I Dread The Thought of the Place: The Battle of Antietam, which covers the battle and end of the Maryland Campaign.

Keith Snyder has worked for the National Park Service since 1985 at four National Parks. He is currently serving as the Chief of Resource Education and Visitor Services at Antietam National Battlefield. He is a graduate of Shepherd University and received his master’s degree from the U. S. Army War College. He retired from the United States Air Force and Air National Guard in 2016 after 40 years of service.

Steve Stotelmyer is a native of Hagerstown, Maryland.  He served in the U.S. Navy and holds a master’s from Hood College. Steve helped form the Central Maryland Heritage League in 1989 which was successful in preserving part of the South Mountain Battlefield.  He is the author of The Bivouacs of the Dead: The Story of Those Who Died at Antietam and South Mountain, and most recently Too Useful To Sacrifice: Reconsidering George B. McClellan’s Generalship in the Maryland Campaign from South Mountain to Antietam.